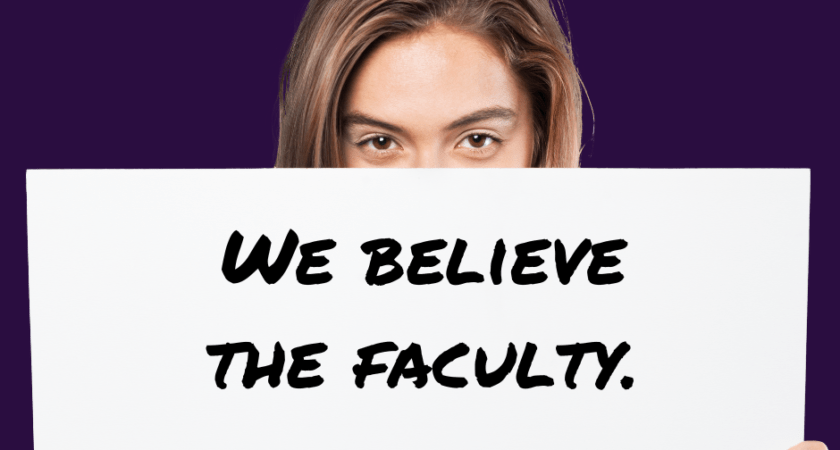 In response, the administration has been completely silent regarding this development. Board chair Rick Strange was quick to come to Bruntmyer’s defense on behalf of the entire board, which seems curious since it stands to reason that the entire board did not have time to meet and form a consensus response before Strange spoke to the press.

The faculty however should not be dismissed, and Save HSU believes them when they say the university is headed on a dire pathway under Bruntmyer and his followers.

Save HSU believes there are several reasons HSU faculty should be trusted.

1) The vote is trustworthy because research shows that a faculty would only conduct a vote of no confidence as a last resort out of desperation.

HSU’s faculty have held a no-confidence vote twice since 2020, which indicates that the administration has done little to build bridges and build confidence within a fractured system of its own making. A second vote indicates the level of dysfunction is so great concerning Bruntmyer and his administration, that faculty feel backed up into a corner and are willing to pull out all the stops again to preserve the very mission and vision of the institution.

2) The faculty vote is trustworthy because a single no-confidence vote (much less a second) is a clear indication that Bruntmyer has lost all credibility as a leader in the system.

Mae Kuykendall, a law professor at Michigan State who has studied no-confidence voting since 2006, states “A no-confidence vote is a raw fact that the president has been rejected by the faculty,” she said. “It tells you that the president lacks any credibility as a steward of that institutional structure of higher education.” Stunningly, in Bruntmyer’s short and controversial tenure, 50 faculty have left (most of which likely voted no confidence last time). This means that the needle has moved 12% more against Bruntmyer with those who may have voted for him last time around and with new hires, despite the culling of professors who were almost certainly some of his most vocal critics.

3) The credibility of the faculty vote is considered trustworthy by higher-ed watchdogs precisely because it was “unauthorized” according to the Chronicle of Higher Education.

When trustees fail to act and when official channels to realize change fail to work, and when calls for change have been completely ignored and wantonly dismissed, a no-confidence vote is an action that can call attention to an utterly broken system. The dysfunction of Bruntmyer’s leadership is so great, the faculty vote has credibility simply because the administration would have never desired such a vote. When normal means of communication do nothing to effect change, groups desiring to avoid ruinous institutional outcomes will often get creative, and by necessity circumvent crumbling systems where trust and open dialogue are already critically low.

4) The credibility of the faculty vote is trustworthy because HSU is a small institution where faculty work in close relation to the president and administration.

This stands in stark contrast to large systems like OU, UT, or TAMU. The faculty of HSU work in proximity to President Bruntmyer and his administration due to the fact that HSU is a school of about 1,700 students (down 25% in four years). In large university systems like the ones mentioned above, most faculty have never even met most high level administrators, and are not capable of passing a trustworthy judgement on their ability to perform their job leading the institution. Board chair Rick Strange cites having worked closely with Bruntmyer over the last several years as the reason for his continued confidence, but it seems unlikely that any trustee would be negatively impacted more by the administration’s poor leadership than faculty, who are on campus almost daily. The administration can paint any picture it wants the board to see at the few meetings they have each year. HSU’s faculty have a daily front row seat to the poor leadership and dysfunction wrought by Bruntmyer and his administration. This means the HSU family, as well as trustees, should take the concerns of faculty seriously.

5) The credibility of the faculty vote is trustworthy because the response of the trustees and administration follow utterly predictable patterns.

Kuykendall states “My research does not support a definite statement about a “typical” response. I can, however, describe one recurring pattern that almost could be said to follow a script. By a circular logic, the leader often claims that the outbreak of opposition is proof of his success: He or she is challenging an entrenched organizational culture that requires bold intervention. The president and his or her allies cite the call for ouster as evidence of stellar performance. The claim verges on a generic defense—one made even when the basis of a no-confidence petition arises from idiosyncratically personal flaws of the leader with no discernible connection to larger political concerns for the advancement of an institutional agenda. This response also serves to stigmatize those voting for removal, suggesting that they have betrayed their institutional trust and resist useful change.” This describes very similarly the response of HSU board chair Rick Strange.

6) The faculty vote is trustworthy because the no-confidence vote is irrifutable proof that faculty moral is devastatingly low.

Save HSU continues to hear from faculty regarding the administration’s lack of responsiveness to numerous and serious ongoing concerns. The faculty themselves state this, and even go so far as to state publicly to media that many are looking for positions elsewhere. Some of the faculty that have already left Hardin-Simmons have landed in teaching positions at other institutions. Others have ended up in leadership in church or para-church organizations. Many are unfortunately still looking for gainful employment after the closure of well funded programs of study. For remaining faculty, the continued uncertainty brought on by poor and unresponsive leadership is exhausting. The faculty of HSU are pleading for trustees to listen and to take decisive action, and continued inaction by trustees will no doubt have ongoing negative impacts concerning the financial, emotional, mental, and spiritual health of faculty and their families. Save HSU encourages the entire HSU family to reach out to faculty members with expressions of encouragement and care during this tenuous season.

7) The faculty vote is trustworthy because all of the concerns they expressed in their public statement have been well documented in local, state and national media over the last four years.

Faculty cite in a public statement, “a sharp decline (25%) in enrollment, consistent failure to establish, engage in, or develop shared governance as required by accreditation; unanswered questions regarding reallocating endowment funds; breakdown of recent negotiations for the purchase of the Patty Hanks Shelton School of Nursing resulting in a lawsuit from McMurry University; and poor handling of the development and implementation of a University Statement of Faith, including Baptist faculty outcry against the required signature of a confession of faith.” These issues have been covered locally by Abilene media, but have also garnered statewide and national attention and coverage including in The Dallas Morning News, Forbes, and by the American Council of Trustees and Alumni.

8) The faculty vote is trustworthy because the vote itself is valid and does not need defending.

In many institutions, bylaws require a no-confidence vote to meet a simple majority threshhold. In this case at HSU, the number was a staggering 76% of faculty present with a required threshhold of 66%. According to Nadler, Lu, and Miller in the Journal of Research on the College President, in a national study of no-confidence votes, it was determined that the root cause of a no-confidence vote is most likely “a reflection of a serious problem in leadership.” The board chair and administration may predictably try to undermine the legitimacy of this action, but the action itself indicates a serious problem of leadership. Kuykendall warns, “There are different scenario scripts that the board might follow to minimize the significance of how many people made that vote.” The fact is, the HSU faculty does not have to justify their vote to anyone. They followed the bylaws in taking the action, and the vote is valid by virtue of the fact that it was properly handled and recorded in an official meeting. Any other narrative by the administration is a smoke screen. The vote is valid. Full stop.

9) The faculty vote is trustworthy because the current administration has arguably been proven untrustworthy in Christian leadership.

According to Ministry Watch, a faith based non-profit watchdog, Hardin-Simmons has a “C” grade for financial and institutional transparency concerning self-reported data. Moreover, according to Ministry Watch’s own rubric for the “Donor Confidence Score,” when asked “Has the organization refrained from the use of non-disclosure agreements?” HSU’s administration answered “Yes.” In the last two years, Save HSU is aware of the use of dozens of non-disclosure agreements utilized as carrots on a stick for faculty buyouts and forced terminations. When will Eric Bruntmyer or his administration contact Ministry Watch and provide more accurate information? This updated information would downgrade HSU’s transparency score from a 69 to 65, or a “D.” Additionally, as the faculty have stated to media, questions still abound concerning the reallocation of millions in restricted endowment funds. A group of HSU donors representing $10.5 million in gifts and over 1000 years of volunteer service to the university signed an open letter expressing concern regarding donor intent. One donor, a widow, was even laughed at by the administration when inquiring about her gift. Should HSU’s board trust the faculty, or the administration that mocks the sincere questions of a widow donor?

10) The faculty vote is trustworthy because the focus of the discussion is behaviors and not personalities.

Save HSU believes the faculty.

They have long been beleaguered by an assault against HSU’s long held values and by an unresponsive president who is indifferent to their concerns.

The administration has a proven track record of desperately desiring to eliminate and silence opposition. This even includes threatening leaders of Save HSU with junk litigation and calling places of employment in an attempt to harass and sabotage the careers of alumni. Save HSU trusts the faculty over the administration, and for good reason.

We implore the Board of Trustees to consider all the reasons the faculty statement is a trustworthy assessment of Bruntmyer’s inability to lead HSU into a brighter future. There is, in fact, a Better Way Forward.