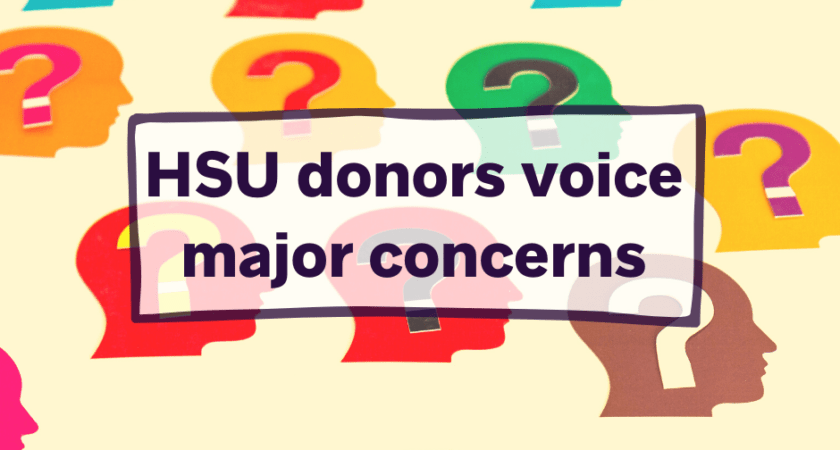 [ABILENE, TX, Sept. 21, 2020]  Numerous donors recently signed an open letter expressing frustration and worry with how their gifts are being used at Hardin-Simmons University (HSU). Representing more than $10.5 million in contributions and over 1,000 years of service to the university, the donors stated “HSU’s direction over the past several years troubles us deeply,” and that decisions regarding gifts “must be made with abiding respect for donor intent.” The letter includes signatures from HSU donors and also individuals concerned with how HSU currently handles donor gifts.

Since the current HSU president, Eric Bruntmyer, announced a plan called the “Way Forward,” slashing beloved programs and initiating mass faculty layoffs, many donors have expressed dismay at the present state of leadership at HSU, particularly with how their past contributions  are being honored and stewarded. Not only is donor intent for past contributions a concern for many, some future donors harbor deep reservations concerning potential planned gifts.

Several donors have requested their gifts be returned, only to be met with frustrating layers of bureaucracy, and even laughter. Voicing frustration the signatories write, “Regrettably, when trying to work with HSU’s leadership, we have been met with stalling tactics or worse – with silence.”

The letter is addressed to the trustees of HSUbecause they are responsible to provide supervision of the presently unresponsive and dismissive administration, and because they serve as fiduciaries concerning every gift – no matter how large or small. Will HSU’s trustees stand up and take responsibility to right the present debacle in leadership, or will they be found negligent in their duties?

For nearly nine months, the leadership of Save HSU has been working with donors to help them know their rights and encouraging trustees to embrace their responsibility of oversight and maintaining donor intent. Dr. Jonathan Davis, one of Save HSU leaders and a Hardin-Simmons graduate states, “One of the keys to a Better Way Forward for Hardin-Simmons trustees is to restore trust with donors. We are simply asking the university to cease alienating past and future donors, honor donor intent, and provide transparency concerning the use and allocation of endowed funds.”

Save HSU leaders recently requested copies of the university’s internal audit reports and tax filings for the last three years and plan to implement a full review of how funds are being handled at HSU. With so many lingering questions regarding donor intent with tens of millions in gifts, Save HSU continues to call for the university to submit to a forensic audit, and has offered to even pay the cost of the audit.

Another Save HSU leader, Rev. Kyle Tubbs, explains “if the trustees truly want to build bridges of healing within the HSU community and re-establish trust with past and future donors, then we call on them to open the books completely.” As of this press release, the university has still not responded to this offer, nor have they released their audits or tax documents for review. Without full transparency, HSU administration continues to leave donors and friends of the university in the dark.

Signatories on the donor concern letter include former administrators, faculty and staff, graduates (many from multiple-generational HSU families), former Alumni Board and Board of Development members, Logsdon Alumni Council officers, the descendant of a past HSU president and board chair (respectively), and other friends of the university. Also included among the signatories are a number of confidential signatures from donors who fear possible retaliation from the current HSU administration.