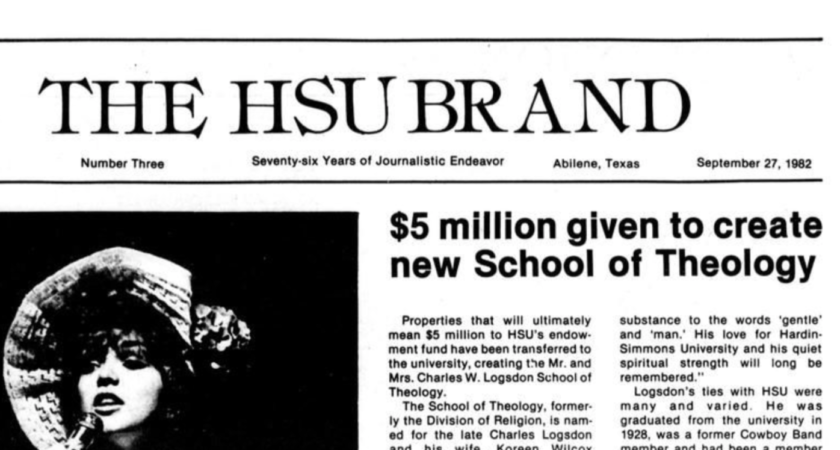 When President Jesse Fletcher announced the Logsdon Gift to the board in 1981, he stated

“The Logsdon gift makes possible the dramatic escalation of a program that is at the very heart of Hardin-Simmons University. The School of Theology will be able to train on both the undergraduate and graduate level Christian vocational workers for both home and abroad on a plane unparalleled in the university’s illustrious history.” (See the full attached article in The HSU Brand, dated September 27, 1982).

Fletcher repeated the claim of Logsdon’s gift being for graduate and undergraduate education in a 1983 Edition of the Range Rider, when he announced H.K. Neely as the Dean of the new Logsdon School. Logsdon’s first graduating class had a masters level student, and the creation of the Logsdon School of Theology established and separated the school from the Liberal Arts College – as reflected in the catalogs of 1982 and 1983, respectively. In 1986, an article in The Brand discusses the MA program as an emerging seminary that competes with Southwestern for students. All of these documents are attached for your own viewing.

If you are a trustee of the university, we invite you to read exactly what you have been entrusted with:

If the president at the time announced to the board that the Logsdon gift was for both graduate and undergraduate education, and if that gift created a school separate from the Liberal Arts School, and if the first dean understood that his MA program was the early formation of a seminary, then how is The Way Forward not a gross violation of trust with the largest gift HSU had ever received to that point?

What would Koreen and Charles Logsdon have to say to the board?

Perhaps that The Way Forward guts the school of theology so much, HSU will be offering far fewer courses in Bible, theology, Christian education, missions, and pastoral ministry than even before 1983. This does not build on the gift of the Logsdons. It seemingly dismantles it wholesale for the use of the general education budget at HSU.

Brothers and sisters in Christ – President Bruntmyer’s plan is not the way forward; it is the great unraveling of the Logsdon gift.

-James B. Simmons, in an 1890’s letter to Rev. R. T. Hanks (first Bible chair of Simmons College and Pastor at FBC Abiline)