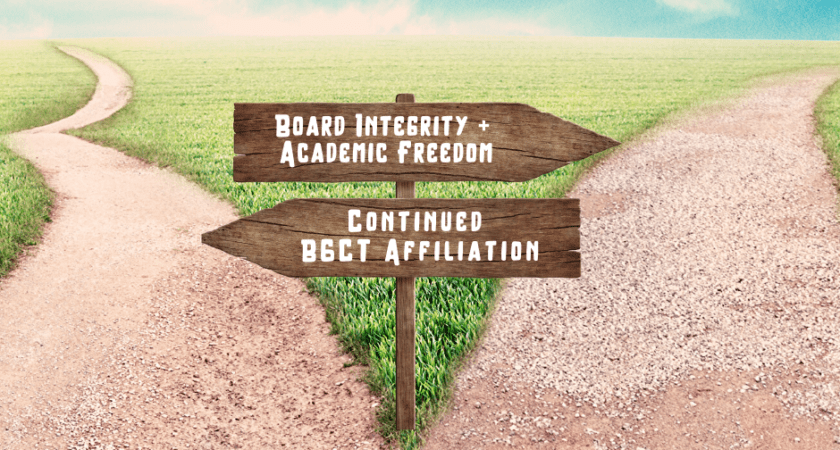 Many who are concerned about HSU’s future feel that one of the fundamental problems with the governance of Hardin-Simmons is the need for a strong and independent board, free from outside influence. This is key to The Better Way Forward. At minimum, it seems the BGCT’s influence over the HSU board has been flagrantly disproportionate to the convention’s level of giving and support to the university. We disagree with a denominational body that gives an incredibly small percentage of the annual budget of the university being allowed to name 51% of all trustees. Clearly, the BGCT’s influence is proportionally out of balance with its giving. We believe that in light of recent events HSU should fundamentally reevaluate her relationship with the BGCT, because the relationship has not only caused the erosion of an independent trustee board, but also has endangered academic freedom – both of which consequences have resulted in a less healthy university.

It seems unlikely that the BGCT’s leadership was not active behind the scenes in lobbying for the dismantling of Logsdon Seminary, thus we question the silence from or denials by the executive director regarding this matter. We have heard multiple credible accounts of a meeting regarding Logsdon’s dismantling that involved the BGCT’s leadership and a few West Texas pastors, HSU’s president and a couple of trustees — acting independently of the trustee board at large. We have also been told by multiple credible sources that Eric Bruntmyer publicly discussed the meeting with faculty, trustees, and other individuals. Given these facts, we hold great suspicion concerning David Hardage’s February 17th statement to the Texas Baptist Executive Board that that he could not recall a single name of a Hardin-Simmons board member. This private meeting can be a threat to accreditation itself, because accreditation agencies take very seriously the independence of a board. This is one of the many reasons we, along with the American Council of Trustees and Alumni, have called for an internal evaluation to determine that HSU is in full compliance with all SACSCOC accreditation principles.

One of our goals from the outset has been to save Logsdon Seminary, and it seems one of the best ways to do that is to minimize the BGCT’s involvement in the university itself. Protecting the health of the university is the primary responsibility of HSU trustees, and from time to time it is the case that relationships – even historic ones – should be evaluated. Hardin-Simmons existed successfully for 45 years before relating to the BGCT, and now that the university has been affiliated with the convention for 70 years it may be time to reevaluate the relationship.

This of course is not without precedent. In recent years, a number of Baptist universities have gone down the same path, including Georgetown College (Kentucky), Belmont University (Tennessee), Mercer University and Emory University (Georgia), Wake Forest University (North Carolina), Furman University (South Carolina), Stetson University (Florida), and the University of Richmond (Virginia). All of these schools are arguably healthier in that they have secured both more fully independent boards and also academic freedom.

David W. Key, former director of Baptist Studies as the Candler School of Theology at Emory University, told the New York Times in recent years, “The real underlying issue is that fundamentalism in the Southern Baptist form is incompatible with higher education.”[footnote] The slowly increasing fundamentalist influence in BGCT life in recent years concerns many in our movement, and one way to insulate the university and seminary from this trend is to eliminate the BGCT’s influence altogether. From appearances by high level BGCT employees in the chapel services at Southwestern Seminary and as speakers at politically charged rallies, to a relatively newly instituted (and poorly named) “New Pastor’s and Wives Retreat,” we wonder if the BGCT is now merely giving lip service to women in ministry. Is it still even committed to being theologically moderate? It seems that the identity of the BGCT is changing in ways which make the tent increasingly smaller – purposefully alienating and even provoking moderates to question the true identity Texas Baptists.

Hardin-Simmons declares of the BGCT on its webpage, “We share a common goal of supporting the work of Texas Baptist churches across the state, and we are committed to providing these churches with spiritually mature members and well-prepared ministers within the Baptist tradition.” It seems perhaps that the commitment to that common work has now been all but broken.

The closure of Logsdon Seminary, and Logsdon extension campuses before that, has even been partly (and ironically) blamed on the BGCT by president Eric Bruntmyer. The BGCT’s giving to Baptist schools across Texas has decreased significantly in recent years because of the convention’s budget constraints. Is the convention expecting to have the same level of influence in its universities as giving continues to decrease, and while universities also must pursue additional funding streams to replace lost revenue?

Additionally, the president’s report in the fall 2019 BGCT Book of Reports shows that appropriations from the BGCT decreased by $107,000 last year. The BGCT’s most recent contribution of $593,000 accounts for 0.7% of HSU’s overall revenue, according to this public record. The university can easily make up this money by getting its ballooning administrative costs (up nearly 30% during the last two years alone) under control, increasing recruitment and retention and being more careful about not getting into protracted, expensive construction projects.

The appropriate question for HSU trustees to consider is this: Should the BGCT be selecting over half of the members of the board of trustees while giving less than one percent of all revenue? This is a steep price to pay for the continued erosion of both board integrity and academic freedom.

Finally, without an accredited seminary that trains vocational ministers, the number of students at HSU receiving BGCT ministerial scholarships will surely decline rapidly. Whatever revenue this was bringing into the university will significantly decrease, considering all the program closures and layoffs. This may make the annual revenue from the BGCT even more negligible. If a relationship of some kind is negotiated with the BGCT in the future, perhaps these scholarships could continue.

Comparisons to Other Baptist Institutions In Texas

Houston Baptist University – HBU renegotiated its own relationship to the BGCT to lessen the number of denomination-named board members, but this was in part due to HBU’s aligning itself in a friendly way with SBTC. It seems that HSU does not need to worry about SBTC involvement sabotaging Logsdon Seminary and incorrectly labeling the school as “liberal.” Instead, some top BGCT leaders and even the university’s own administration have done that all on their own.

Baylor University – Baylor negotiated for fewer BGCT-named board members for the sake of academic freedom and board independence. The 1991 agreement between Baylor and the BGCT stated: “The BGCT recognizes that Baylor is an independent, nonprofit, nonmember corporation under the laws of the State of Texas with the full legal right, power and authority to amend or rescind its articles of incorporation or bylaws without approval or consent of the BGCT or any other party.” The revised agreement in 2011 states that “Because the BGCT’s authority is a delegation of authority from Baylor and because of issues related to Baylor’s accreditation, the BGCT agrees that it will consider Baylor’s best interests as the only criterion in the selection of Baylor [regents]….”

Hardin-Simmons trustees should realize what Baylor’s leadership realized years ago – that the BGCT’s naming any trustees is a delegation of legal authority on their own part. Considering that the BGCT’s present leadership seems to be exerting external influence on the board in addition to naming over half of board members, HSU trustees should ask themselves if they have ceded too much of their own legal authority and fiduciary responsibility to the BGCT.

It is time for trustees at Hardin-Simmons to take full control of the university, and hold the BGCT’s leadership accountable for undermining the existence of Logsdon Seminary. We believe this will ensure that future board decisions are made free of outside and outsized influence by an organization that gives an increasingly small percentage of HSU’s revenue. The real question is not whether Hardin-Simmons can live without the BGCT’s annual contributions. Rather, it is whether Hardin-Simmons can afford the cost of continuing to receive them.